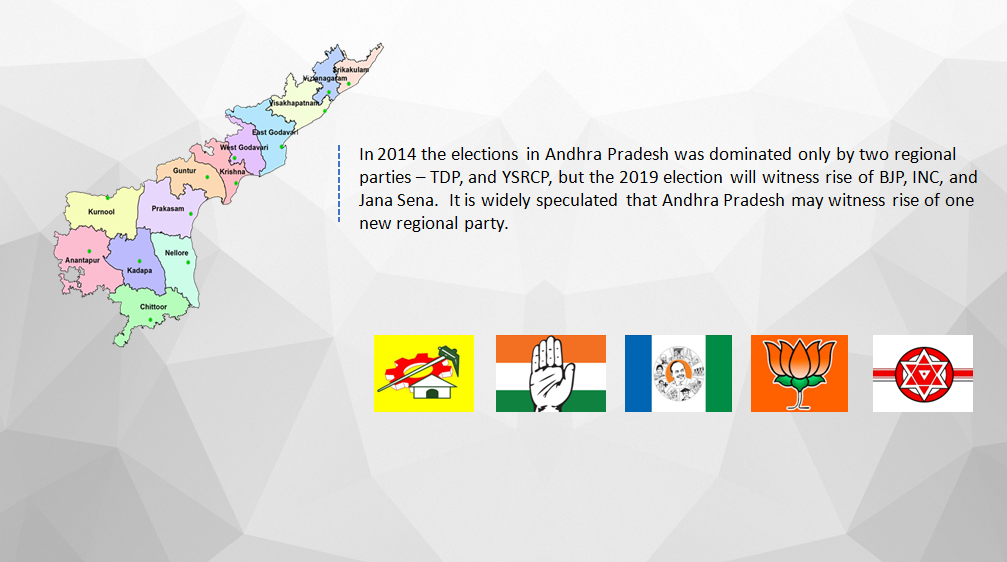 Andhra Pradesh is a young state with roughly 42 percent voters who are below 34 years of age and 65 percent of voters below 45 years of age. These young voters have very different requirements, which is beyond the traditional vote bank requirements. They are restless and hungry for growth. I strongly believe this election, the state will vote for the party that will demonstrate commitment to development and growth. This election will not be about Cash, Caste, and Charisma but will only be about commitment of great future, growth and development.

As we know that in the last election all districts were dominated only by two regional parties TDP, and YSRCP and the national parties BJP and INC had no greater relevance in the state. In my views, this election the dynamics of the political campaign will be different. The state will get into exploratory mode and they will experiment beyond the dominant parties TDP and YSRCP. I have very strong feeling that this election we will also witness emergence of a new regional party and the national party, BJP establishing itself as a strong force in the state. The path to victory will not be easy this season. Let’s explore the possibilities.

The party in opposition – YSRCP is working hard to win the state and if we have to believe the ground reports they may form the next government in the state. The YSRCP chief Jagan Mohan Reddy is working hard to win the trust and support of the voters. It is widely believed that his Praja Sankalp Padyatra is huge success but if I have to evaluate the campaign performance on the parameters of efforts, spend, visibility, and engagement, I will call it a moderate success.

I visited one of the pockets of Vijayawada to understand the on-ground impact of the padyatra and I was not much impressed by the return of investment or the return of efforts by Jagan. In my views, there was a sizable mismatch in campaign resource mobilization, the optics and theatrical of the padyatra and crowd turnout. Having said this, I still believe that the campaign performance was testimony of the popularity of Jagan and in way announcement that probably he is the tallest leader in current day Andhra Pradesh.

As of now, the dominance of the Jagan can only be challenged by the current Chief Minister N Chandrababu Naidu (CBN) and his party TDP. We all know that the last election CBN was not winning on his own. He won last election as he managed to stitch a unique alliance with BJP, and Pawan Kalyan’s Jana Sena and this alliance helped him win the 2014 election. Now that TDP is out of the NDA and BJP, and Jana Sena mostly will not support CBN in the 2019 election, the road ahead for CBN is not easy. It is widely believed that this election he may go solo; and if CBN is going solo he is bound to lose this election.

In recent times, CNB has been targeting BJP and accusing them of going back on the promise of granting special category status to Andhra Pradesh. This narrative has no unique identity and all other parties – YSRCP, INC, and others will also bank on the same storyline. It will not be wrong to say that TDP today has no unique storyline to win trust of voters and in the progressive state like Andhra Pradesh one can’t win election without a compelling story. Worst, CNB is hell bent on erasing the footprint of old stories by extending hands towards INC. This move will definitely be seen as CBN’s deviation from the ideology of TDP founder NT Rama Rao, who wanted to unite all non-Congress parties to forge an alliance. I believe these moves will only pull down the vote share of the party.

The option of BJP working out a north-east like equation and attempting to form a government in the state can’t be ruled out. The party to achieve the objective mostly will work on their basic campaign framework strengthening the grassroots through panna pramukhs, booth-level committees and door-to-door campaigns and on-boarding senior leaders from other parties. I am quite certain that BJP, and Pawan Kalyan’s Jana Sena will forge a pre-poll alliance. If I have to believe the speculation and the on-ground movements there will be vertical split in TDP and the new group may join the NDA.

BJP, on the one hand where we are witnessing assertive, agile and aggressive team committed to build party with help of organic and inorganic growth models; INC, on the other hand is surrounded by legacy, loyalty, and lethargy proposing to revive party. The party recently Andhra Pradesh pointed Oommen Chandy as party in-charge of Andhra and hoping to revive the state under his guidance. This veteran INC leader has a tough task ahead as the party failed to win even a single Assembly seat in the state after the bifurcation.

I believe that most of the people in Andhra Pradesh are congress supporters at heart just that they are deeply hurt and disgruntle. I believe INC still has a place in the hearts of the people in the state and, therefore, there is indeed a chance to revive the party but INC in the current avatar may still struggle to reach double digit vote share. The party needs young leaders who can outsmart assertive, agile and aggressive approach of BJP, and a strong storyline to win hearts of the voters. One of the ways for INC to win back hearts of voters of Andhra Pradesh by helping state get Special Category Status. Though this move will not help them get a lion share in the state but definitely will help party revive.

The new political landscape in Andhra Pradesh is going to be fresh and progressive but will the old artist script the story or new one will replace the old guards is yet another story in making.