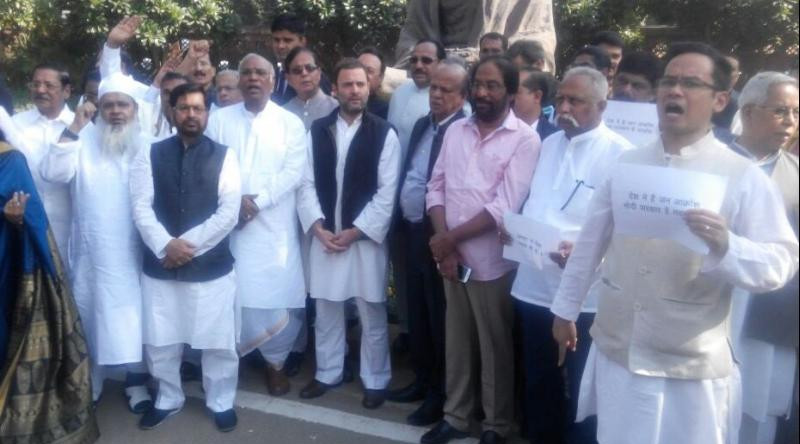 Indira Gandhi has been one of the finest Prime Ministers Indian democracy has experienced. She with the help of all her populist moves like nationalization of banks, Pokhran nuclear explosion, abolishment of privy purses, Garibi Hatao, division of Pakistan attained the status which was larger than life.

Almost after forty years, history is kind of repeating itself. This time it is about Narendra Damodardas Modi. Modi has yet not reached the popularity that Indira enjoyed but we can easily say that BJP is Modi, and Modi is BJP.

Today, the politics in India is about the might of Modi versus all others. It will be wrong to say that it is about BJP and all others. Yes, the scenario is almost comparable to the times of Indira Gandhi when she enjoyed popularity beyond comparison.

All opposition parties understand the situation very well. They also understand the influence Modi enjoys. They are aware of the fact that the position which Modi enjoys is not given to him but he has earned it at every stage of his political career. It will not be wrong to say that Modi is Chandragupta Maurya of modern times.

The success of the MahaGadbandhan was once again attempted in the Uttar Pradesh assembly election, but the experiment failed. It was seen as absolute opportunistic alliance with has no future. To my mind the MahaGadbandhan was a failure from idea to implementation. It was more like a desperate measure to tame the juggernaut Modi.

In current situation, even if we have affirmative answers to most of the above-mentioned questions the future of MahaGadbandhan still looks not so bright. The non-BJP parties can be classified in three categories. The Core Opposition, the Ideology Seeker, and Strong BJP allies.

The core group which is ready to form MahaGadbandhan and is promoting idea of an alliance which is secular in nature. They promote themselves as a secular force against the communal BJP. The core group includes INC, NC, IUML, JDS, NCP, SP, BSP, TMC, DMK, AAP, RLD, RJD, Left. If we evaluate the vote share and the probable seat share we would realize that at present they command roughly 100 seats.

The second major group which is not clear with the idea of the MahaGadbandhan but may join the group if the alliance offers attractive opportunity. They mostly have not bought the idea of the secular alliance and mostly awaiting the right ideological mix. In my views, the other set of parties that do not believe in the idea of a MahaGadbandhan based on the idea of a secular alliance include JDU, TDP, AIADMK, YRSC, TRS, BJD, SS, MNS. This group though is wary of the increasing might of Modi and the dominance of his brand of politics. This group has control on another 100 parliamentary constituencies.

Even if the Core Opposition, and the Ideology Seeker join hands they might win a few more than the 200 parliamentary constituencies. The number still will not be sufficient to for the government. They might project themselves as the alliance that will be the united opposition.  I can say with certain assurance that the third set which is part of the NDA core group and the key BJP allies is very prominent and far from the impact of anti-incumbency. This group is still gaining ground and increasing its vote share. The key BJP allies have mostly accepted the dominance of Modi and his brand of politics include LJP, SAD, AD, and other smaller parties. These parties are thriving on the local leadership and the charisma of the brand Modi. These parties are kind of extension of BJP political-DNA. I will not be surprised if some of these small parties get merged into BJP before 2019 elections and a new set of the ideology seekers join NDA.

The dynamics of politics in India is evolving and it is beyond the binary equations of the secular and communal. The new equation is extremely complex and probably beyond the dynamics of caste, and religion. I am not sure if the key players of the proposed MahaGadbandhan are analysing the emerging political equation and its impact.