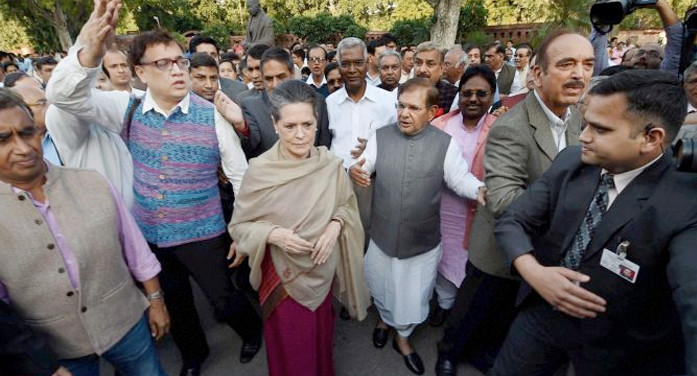 Political alliance without ideological oneness will not take opposition anywhere. History is testimony to the opportunistic alliance and current political scenario is no different. Post-independence, India has witnessed three big civil-political movements. These movements were mostly result of strong voice against the incumbent government.

In past, we have witnessed three major political parties emerging out of movement against the incumbent government – Janta Party, Janta Dal and the Aam Admi Party. We all know what happened to Janta Party, Janta Dal and to the ideology for which the leaders were fighting. We also know that the politicians born out of 1977 and 1989 movements have looted our nation in best of their capacities. We are also witnessing the same trend with Aam Admi Party.

The first Voice of civil-political revolution was championed by Jayaprakash Narayan, Satyendra Narayan Sinha, Jivatram Kripalani, Biju Patnaik and Morarji Desai, and other political leaders who were imprisoned during emergency. These political leaders joined hands to form Janta Party. This movement (movement of 1977 – the voice against the incumbent government) had given birth to the current political leaders like Lalu Prasad Yadav, Mulayam Singh, Nitish Kumar, Ram Vilas Paswan, and many others. I am sure the soul of Ram Manohar Lohia and Jayprakash Narayan, and others must be ashamed of some of their star followers. They must be ashamed of the way the star followers have changed their ideology in name of politics, and are indulged in mass corruptions, and looting of national wealth.

In 1989, the second voice of change was championed by V P Singh. He united regional parties such as the Telugu Desam Party, the Dravida Munnetra Kazhagam, and the Asom Gana Parishad under the umbrella of Janta Dal. it will not be wrong to say that the movement witnessed its decline much before the civil-political movement gained prominence. This movement was not as strong a movement as the Janta Party movement. In 1989, there was not an ideological fight. The alliance was primarily alliance of convenience, an alliance against the incumbent government, an alliance based on anti-congress ideology.

One can try and define it in many other ways but in my view the reality is that the VP Singh movement was as a strong movement against the incumbent government. It was not built on the framework of strong ideology. It was an opportunistic alliance against the incumbent government and hence it disintegrated much before the movement started. We witnessed the sign of disintegration soon after its integration and coming to power. The formidable alliance in the form of Janata Dal disintegrated into various largely regional parties – Samajwadi Party, Janata Dal (Secular), Janata Dal (United), Rashtriya Janata Dal, Indian National Lok Dal, Samajwadi Janata Party (Rashtriya), Biju Janata Dal, Rashtriya Lok Dal, Lok Janshakti Party, Samata Party, Socialist Janata (Democratic) Party. Today they keep coming up and try and integrate as a ‘Janta Parivar’