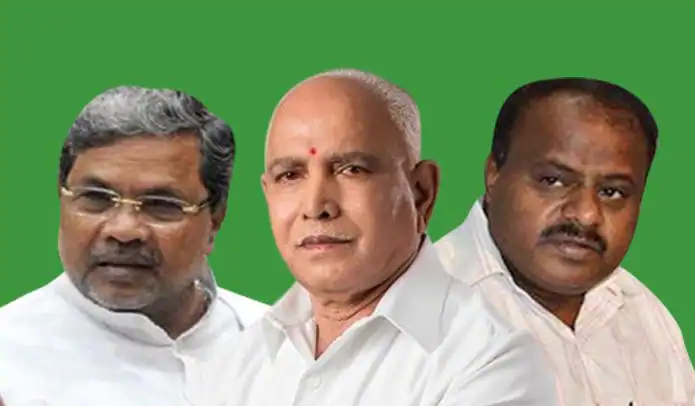 Demography, cultural and ethnic dynamics play an important role in this southern State

There are many political parties in the field — INC, BJP, JDS, Bahujan Samaj Party (BSP), Maharastra Ekikarana Samiti (MES), Aam Aadmi Party (AAP), All India Majlis-e-Ittehadul Muslimeen (AIMIM) and Mahila Empowerment Party (MEP) — but the fight is mainly among the INC, BJP and the JDS.

It is important to know the demography, cultural, and ethnic dynamics of Karnataka to understand the election dynamics. Karnataka can be divided into four distinct regions – North-West Karnataka (Mumbai Karnataka), North-East Karnataka (Hyderabad Karnataka), Coastal Karnataka, and Old Mysore and Bangalore. In this part, we analyse the first two regions:

North-West Karnataka (Mumbai Karnataka)
Mumbai Karnataka is a stronghold of the BJP. In a few seats, the JDS can challenge the dominance of the INC and the BJP, but this dominance is owing to strong candidates rather than the party. Mumbai Karnataka is Lingayat-dominated. Siddaramiah is trying his best to break the monolithic BJP vote bank by giving separate religious status for Lingayats. The other dominant force is Marathi influence and the Mahadayi issue.

The popularity of the BJP here is because of mass leaders BS Yeddyurappa, Jagadish Shettar and Prahlad Joshi, and the foundational work done by the RSS. Moreover, the pro-Muslim image of the INC would also help the BJP consolidate vote share in this region. A detailed analysis of all the six districts will help understand the situation better.

Belgaum: Of the 18 seats, there has been a bipolar contest between the BJP and the INC in 15. In three seats, the MES is strong and there is a straight fight between the MES and BJP. The BJP is quite strong in this district. In 2013, the divided BJP got 11 seats – BJP (9), KJP (1), BSRCP (1), with roughly 40% votes. If the BJP manages to consolidate Hindu (Kannada and Marathi) votes, it can win most seats.

Bagalkot: It was BJP’s fort in 2008 with 47% vote share, but the numbers changed in 2013 and the party won only one seat. The Parivarthana Yatra by Yeddyurappa was well received and if BJP maintains the momentum, it could double its tally.

Bijapur: The INC may challenge the dominance of the BJP here by fueling the Lingayat issue but the BJP local leadership has put up a spirited fight.

Gadag: The BJP had swept all the seats in 2008 and lost all in 2013 due to the division of votes between the BJP, KJP and the BSRCP.

Haveri: The BJP is very strong here and had won 5 seats in 2008 with 42% votes. With strong candidates, it may repeat the performance.

The Mumbai Karnataka region contributed to the success of BJP in 2008. Backed by its Parivarthana Yatra, the region is likely to do the same this time too. But the Lingayat card may change the numbers.

North-East Karnataka (Hyderabad Karnataka)
There is some amount of Telugu dominance in this region. With 40 Assembly constituencies, it has a strong mix of Dalit, Minorities, Reddy-Vokkaliga and Lingayat voters.

The region, on one hand, is dominated by BJP leaders like Reddy brothers and B Sriramulu and, on the other, is home to tallest INC leaders Mallikarjun Kharge and Anil Lad. All the six districts – Bidar, Gulbarga, Yadgir, Raichur, Bellary, Koppal would witness a close contest between the INC and the BJP.

Bidar: The JDS can play a spoiler. In the last election, the united BJP got 38% and the united INC (after Karnataka Makkala Paksha joining it) had 34% vote share. The Parivarthana Yatra might have a positive influence here.

Gulbarga: This district has 13 Assembly constituencies. Here, Yadgir needs a special mention as this district was created by the BJP and is now the party’s stronghold. The JDS has a strong candidate in one seat. Moreover, the united BJP also performed very well in zilla panchayat elections though, the INC won the Gulbarga parliament seat. The fight here will mostly be a function of the right candidate selection.

Raichur: Here 4 seats are reserved for the STs and one for SCs. The district has mostly witnessed a bipolar contest between the BJP and the INC except in 2 seats where the JDS has strong candidates. It is important to note that in the last Assembly election, of the 47% vote share of united BJP, 17% was managed by the Badavara Shramikara Raitara Congress Party (BSRCP) of Sreeramulu. With Sreeramulu back in the BJP, the party could do well.

Bellary: While 5 seats are reserved for STs, 2 are for SCs. Bellary is Sreeramulu’s home district and a power centre of the Reddy Brothers.

Koppal: JDS is strong in one seat. As the BJP was a divided house, the INC won the last election in this district. If the voters go back to the united BJP, the same will be reflected in the results.

The outcome of the 2018 election results of the Hyderabad Karnataka region would mostly decide the fate of the next government in the State. This is the only region where the fight between the INC and the BJP would be very close and critical. In the other regions, the outcome is mostly defined and very little can be changed.