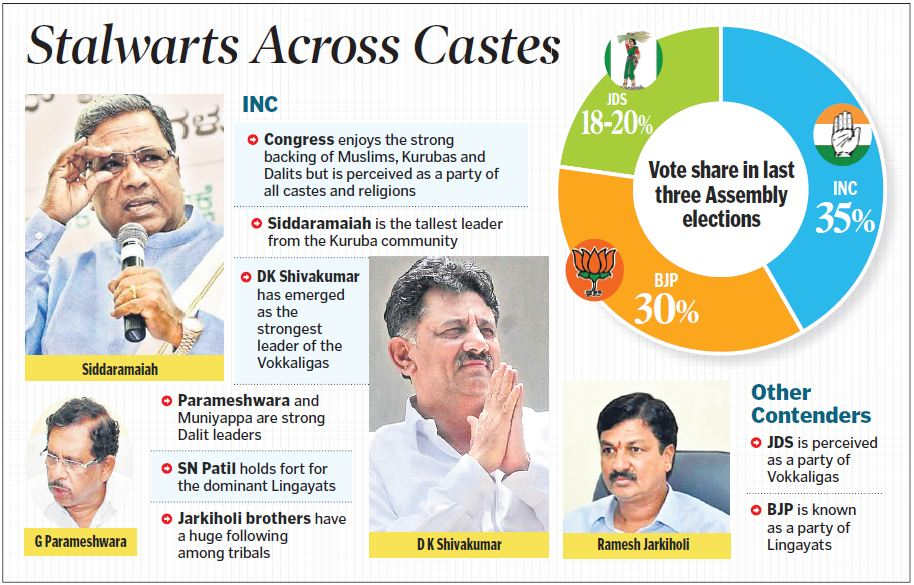 Anti-incumbency is yet to set in and if Siddaramaiah plays positive, he has a good chance to retain power

The Indian National Congress (INC) is one of the strongest political parties in Karnataka. It has managed to retain 35% vote share in the State during the last three Assembly elections.

Moreover, the spread of this vote share is almost uniform across the State unlike the Bharatiya Janata Party (BJP) and the Janata Dal Secular (JDS), which have pockets of strong vote banks.

The regional party, JDS, has held on to its 18-20% vote bank for the last three Assembly elections. The BJP has been adding voters to its fold during the last two decades, and in the last two elections, its vote share hovered around 30%.

Karnataka is one of the unique States where all three parties have strong vote banks and mostly these loyal voters don’t shift sides. This is reflected in the vote share of these political parties over the last two decades.

In the ensuing Assembly election, it is likely that we will witness a very interesting fight among the three key political parties of Karnataka – INC, BJP, and JDS. To understand the emerging electoral situation, let us explore the current state of all the three parties.

The sentiment of anti-incumbency in a few pockets is very normal for any incumbent government. But the anti-incumbency is not uniform across Karnataka and there are pockets where voters are happy with the work of Chief Minister Siddaramaiah. So, it will be wrong to classify the current situation as strong anti-incumbency.

This anti-incumbency can be neutralised with the help of a few positive moves and that is what Siddaramaiah has been doing lately. He has mostly neutralised the mood of anti-incumbency with the help of pro-poor policies, stand on Hindi imposition, positive moves towards the Karnataka Flag issue among others. These moves in recent times have helped the Chief Minister establish himself as one of the tallest mass leaders in the State.

Mass Leaders
In Karnataka, the INC has many other strong leaders like DK Shivakumar, G Parameshwara, KH Muniyappa and SN Patil. The collective might of these mass leaders can help it win the desired vote share.

Moreover, in recent times the INC has played the caste equation very well. It has strong representation from all influential castes in the State. For instance, Siddaramaiah is the tallest leader from the Kuruba community, DK Shivakumar has emerged as the strongest leader of Vokkaligas, G Parameshwara and KH Muniyappa are strong Dalit leaders, SN Patil represents the dominant Lingayat community and Jarkiholi brothers have a huge following among tribals. It will only be right to say that no other political party has such well-defined representation.

In the ensuing election, which the BJP will contest as a united, cohesive party, it is expected to pose a much stiffer challenge to the INC.